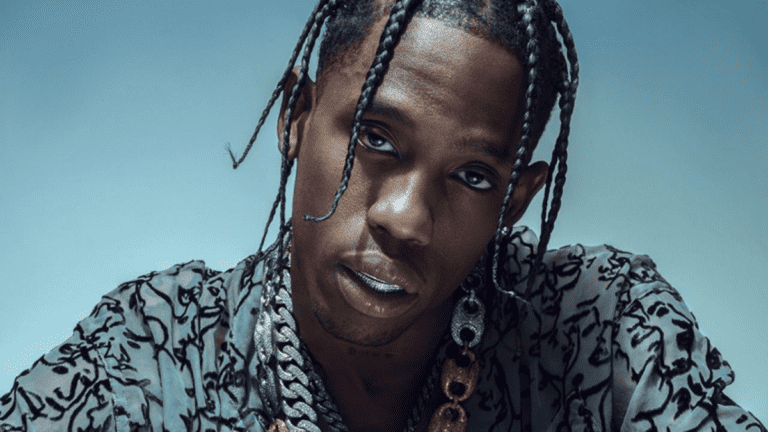 Have you ever wondered what Travis Scott’s net worth is? As one of modern hip-hop’s most prominent figures, odds are you have heard of him, if not his music.

This post will discuss how Travis Scott built his massive net worth and what you can take away from his story.

Initially, he lived with his grandmother in South Park, Houston, a notoriously high-crime area, until the age of six.

Afterward, Travis Scott moved to the middle-class suburb of Missouri City, southwest of Houston, where he lived with his parents.

Here, he attended and graduated from Elkins High School. During his time at high school, Travis slowly started to embrace his artistic abilities.

At 16, Scott formed the musical duo “The Graduates” with his childhood friend Christ Holloway.

The newly formed duo released their untitled first EP on Myspace in 2008. The following year, Travis formed a new group, “The Classmates,” with high-school friend OG Chess, releasing two other projects on Myspace.

Following graduation, he enrolled at the University of Texas-San Antonio but eventually dropped out during his sophomore year to continue pursuing his musical ambitions.

To his parent’s strong disapproval and disappointment, they stopped providing Scott with money and support. The future star artist was now all on his own.

After dropping out of college, he moved to New York City, where he worked with his friend, Mike Waxx, on his next potential project.

Frustrated with a lack of progress, Scott moved to Los Angeles after spending only four months in NYC.

During his stay in Los Angeles, he slept on a friend’s couch as he continued to produce music.

Travis Scott quickly began building his reputation in the hip-hop industry as he continued to drop more projects on MySpace.

Nonetheless, he was still labelless and desperately seeking means of faster growth.

To his prayers, both Kanye West’s GOOD Music and Epic Records reached out with label contracts hoping to sign the young talent from Houston.

Knowing this was his ticket to the top, Travis Scott quickly jumped back into the studio, feeling more motivated than ever.

Shortly after his signing, Travis planned to release his first solo mixtape, “Owl Pharaoh,” as a free download over MySpace in 2012.

The project’s release was halted over sampling clearances. A year later, it was released on the iTunes store.

Continuing to make music, Travis quickly found himself performing at local shows. His first was the 2014 SXSW music festival in Austin, Texas.

Because of its unique production and experimental nature, the album truly stood out and left listeners in awe.

Shortly after its release, the album reached mass commercial and critical appraisal in the hip-hop community.

It featured guest artists such as Quavo, Kanye West, The Weeknd, and Justin Bieber, to name a few. The album debuted at number three on the US Billboard 200 chart.

Travis released “Birds in the Trap Sing McKnight” the following year, debuting at number one on the US Billboard 200 chart.

Within the same month, Scott had signed a worldwide deal with Universal Music Publishing Group to reach a grander audience.

In addition to his music, Scott does production work for many other superstars in the music industry.

As both a world-class artist and producer, it’s no surprise Travis amounted to the musical success that he did.

Throughout his musical career, Travis Scott has won several awards and recognitions. His first was the People’s Champ Award at the 2016 BET Hip Hop Awards.

He was nominated for another Grammy in 2018 and several more in 2019, including Best Rap Album and Best Rap Song.

Here is a list of Travis Scott’s wildly accredited album catalog by year of release:

After a tragic incident at the Astroworld festival in Houston, TX, that left eight dead and many more injured in November, Travis Scott is now facing a controversy that could dramatically impact his net worth.

He is facing a combined $750 million lawsuit from 125+ attendees of the event, per TMZ.

His shows are known for being dangerous, as he has reportedly been arrested several times for inciting riots at his performances in the past.

Travis Scott is also no stranger to lawsuits. Among countless filings, in September 2021, he was sued over the misleading labeling of his hard seltzer brand, Cacti.

Rebecca Read filed a lawsuit around the brand’s claims to be “made with 100% Blue Agave from Mexico.” The drink is made with agave sweetener, not the pure blue agave used in tequila.

The Astroworld controversy will undoubtedly cause Scott’s net worth to take a hit.

We can anticipate a loss from canceled shows (Scott refunded every attendee of the Astroworld event and canceled his following two concerts). As of today, his net worth remains $60 million.

As of January 2023, Travis Scott has a net worth of $60 million. His net worth is primarily made up of yearly earnings, which vary vastly depending on whether or not he’s on tour.

Outside of his musical endeavors, Travis has also amassed a few million from his Nike endorsement deal via merchandise royalties.

In June 2020, Travis paid $23.5 million in cash for a mansion in the hills of Brentwood, Los Angeles. The property is expected to have appreciated closer to $28 million as of 2021.

Is Travis Scott With Kylie?

The two have been through a lot together and welcomed their second child in February 2022.

What Is The Salary Of Travis Scott?

Travis Scott is one of the highest-paid rappers in the industry, raking in $60 million between 2019 and 2020.

Additionally, his Astroworld tour grossed $65 million (although, due to lawsuits, it is unclear how much he walked away with).

He earned an additional $20 million from record sales, touring, and endorsements between 2017 and 2018.

Believe in your vision

At a time, Travis was sleeping on his friend’s couch with no emotional or monetary support from his family.

Regardless, he continued to push and perfect his craft because he believed in his vision.

Even when we feel the odds are stacked against us, we must continue to focus on our vision to push through difficult times.

In times like this, your willpower and self-belief will lead you out of the storm.

Travis has never failed to be unique, from his first album release to his most recent merchandise drop.

Like Travis, we should always aim to be as unique as we’re comfortable expressing ourselves.

The world is full of ideas, many of which haven’t been created. It’s up to us to do something different and hopefully let it lead us to a wealthier future.

Travis has shown to be a master at leveraging his brand, from brand endorsements to virtual video game concerts.

When you start getting your business or brand off the ground, don’t be afraid to network and seek mutually beneficial partnerships to continue your growth.

As Travis has shown, this can lead to a world of fortune.