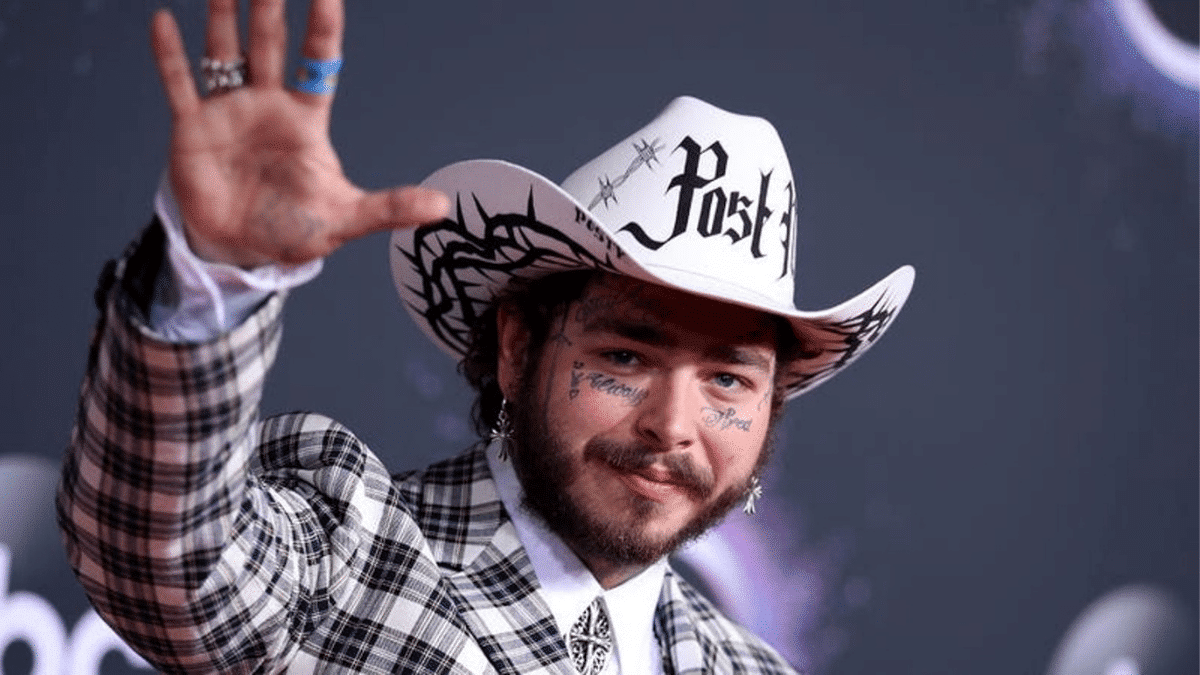 Have you ever wondered what the net worth of Post Malone is? Malone has gained acclaim for being extremely diverse as an artist, combining multiple genres of music to make hit records, which has catapulted him into mainstream success and popularity, resulting in large amounts of wealth. As of April 2022, Post Malone has a net worth of $30 million. This post will illustrate his journey to success.

Post Malone, formerly known as Austin Richard Post, was born July 4, 1995, in Syracuse, New York. His father, Richard Post, and stepmother Jodie raised him, and when he was nine years old, he would move to Grapevine, Texas.

His father was a DJ and introduced Post to various genres, Hip Hop, Rock, and country, at an early age. Inspired by the famous video game Guitar Hero, Post would begin playing guitar.

In 2010, he auditioned for the American band Crown the Empire but was rejected due to breaking his guitar strings during the audition. Despite the disappointment, Post would continue his musical journey into high school.

He attended Grapevine Highschool and would create his first mixtape Young and After Them Riches. He would show the mixtape to his classmates, and they voted him “Most Likely to be famous” little did they know they would be suitable, and Post would become one of the most famous rappers in the world.

Post would briefly enroll in community college but quickly dropped out and moved to Los Angeles to pursue a career in music. He would befriend producers and artists in the area and form group BLCKVRD; they would move in together and record music together.

In 2015 Malone would write and record the song White Iverson in just two days. He would upload it to his Soundcloud and make a music video for the track. A month later, he had over a million views, and the song was an internet sensation.

The success of White Iverson made Post a hot commodity in the eyes of the rap labels, and they began calling. He would ultimately sign with Republic Records, who represent Drake, Ariana Grande, Zendaya, and many more.

After securing the deal, he would be invited to perform at Kylie’s Jenner’s birthday party. Which, as one could imagine, was filled with celebrities and massive names in the music industry.

At the event, he would meet the legendary Kanye West, who was a fan and would feature Post on his Album The Life of Pablo. He would also meet the renowned Canadian artist Justin Bieber, who invited Post to open for his Purpose World Tour.

Post was one of the best young rappers out and had received cosigns from some of the industry’s finest. Fans were highly anticipating new work, and in the winter of 2016, he would release Stoney, his first studio album, which peaked at Number 6 on the Billboard top 100.

The album was a great success, but Post was unsatisfied and felt it was “mediocre.” He would release two more albums Beerbongs and Bentley’s (2018) and Hollywoods bleeding(2019). Both debuted at number one on the Billboard top 200.

The former produced hit single Rockstar, which reached number one in several different countries and was nominated at the Grammys for record of the year. Both contributed to Post selling over 80 million records worldwide, making him one of the best-selling artists in the world.

As of April 2022, Post Malone has a net worth of $30 million. He has built a massive following who listen to every release religiously—allowing Post to earn tremendous profit from streaming services such as Spotify and Apple music. He has reached number one on the US Billboard Rap Airplay and Adult Contemporary, which has diversified his listeners and expanded his popularity. Post is only becoming bigger as time goes on, and it’s safe to say his pockets will do the same.