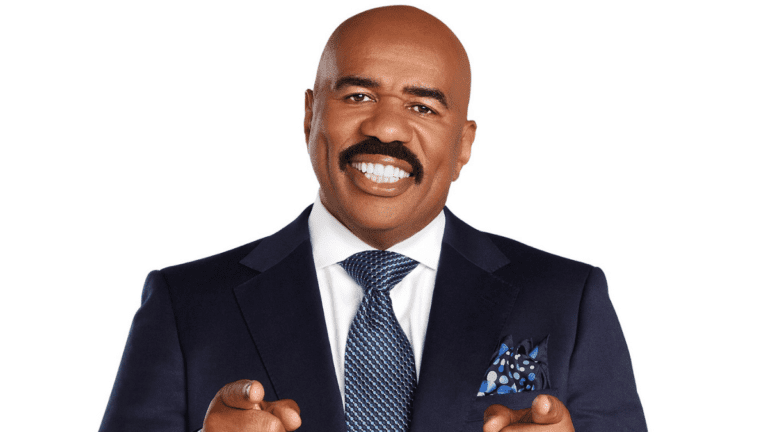 Have you ever wondered what Steve Harvey’s net worth is? Well, the television personality is one of America’s most beloved icons.

After beginning his journey as a comedian, Steve Harvey’s career (and net worth) has aged like a fine wine.

With multiple business ventures as well as a magnetic attitude, success seems to follow Harvey wherever he goes.

But how much is Steve Harvey worth?

Well, As of January 2023, his net worth is $200 million! In this post, we’ll show you how the Hollywood star built his fortune.

Broderick Stephen Harvey was born on January 17, 1957, in Welch, West Virginia. His parents were Jesse Harvey, a coal miner, and Eloise Vera.

When Harvey was young, he and his family moved to Cleveland, Ohio. Little did Steve Harvey know, at the time, that one day his new street in Ohio would be named “Steve Harvey Way.”

After graduating from high school, he attended Kent State University and West Virginia University. There, he studied communications and continued to hone his skills as a comedian.

He was a member of the Omega Psi Phi Fraternity but never ended up graduating.

Steve Harvey has referenced numerous times the tremendous financial struggles he faced in his youth.

For a while, he had no direction in his life. He went from job to job, simply trying to make ends meet.

Harvey has been a boxer, an autoworker, an insurance salesman, a carpet cleaner, and even a mailman.

In fact, it wasn’t until 1985 that he decided to try his hand at stand-up comedy at the Hilarities Comedy Club.

Still, even while finding what would eventually be his passion, Steve Harvey was homeless for three years. He would sleep in his 1976 Ford and shower at gas stations or swimming pools.

After years of hard work, Steve Harvey eventually got his big break in the TV industry.

After placing as a finalist in the Second Annual Johnnie Walker National Comedy Search on April 16, 1990, he received the role of host on “It’s Showtime at the Apollo,” succeeding Mark Curry in the role.

Now that he finally broke into the industry, there was no turning back.

Harvey’s success with standup comedy eventually led to a starring role in the ABC show “Me and The Boys” in 1994.

Steve Harvey’s career began to take off when he began appearing in television regularly.

His initial experience in television led to his show, “The Steve Harvey Show,” which aired for six years.

The WB network series was based on his stand-up comedy and was set in a Chicago high school where he played Coach Steve Hightower.

Steve Harvey and Cedric the Entertainer

Although The Steve Harvey Show was popular among the black community, it never received high critical acclaim. However, it forged the friendship between him and Cedric the Entertainer.

The duo eventually went on to co-host the Kings of Comedy Tour, which also included Bernie Mac and D.L. Hughley.

The tour was a massive success and became the highest-grossing comedy tour to date in the United States.

The Steve Harvey Morning Show is a talk radio show that airs weekday mornings from 6:00 am to 10:00 am EST. The show is produced by Radio One and focuses on relationships, parenting, marriage, and self-improvement.

The show has won numerous awards, including the NAB Marconi Award for “Major Market Personality of the Year” in 2009 and 2010.

Steve Harvey now serves as the host of “Family Feud,” a role he took over in 2010, replacing John O’Hurley.

When Harvey took over the show, it was a disaster and in danger of being canceled.

Since he became host, Family Feud has regularly ranked among the top 10 highest-rated programs in all daytime television programming and third among game shows (behind Wheel of Fortune and Jeopardy!).

In June 2015, Family Feud surpassed Wheel of Fortune as the most-watched game show on television and consistently began ranking among the top three game shows in all of television.

In addition to his radio and television career, Steve Harvey has also pursued many other business ventures.

In 2014, he launched Steve Harvey Global, a multi-platform content company.

The company creates original content across all platforms, including TV, film, digital media, and live events. In 2015, the company produced its first project with the release of “Think Like A Man Too.”

The movie grossed over $91 million at the box office and became one of the highest-grossing romantic comedies of all time.

These books were both turned into films in 2012 and 2014, respectively. In addition to his books, Harvey has also released several comedy albums.

In 2009, he launched his own clothing line called the “Steve Harvey Collection.” The line is sold exclusively at Macy’s and includes both casual and dressy wear for men.

The channel is available on DirecTV, AT&T U-verse, and Comcast. The Steve Harvey Channel features a mix of talk shows, game shows, and reality programming.

In 2016, Steve Harvey launched his own dating website called “Delightful.” The website is geared towards helping women find Mr. Right.

As of January 2023, the net worth of Steve Harvey is $200 million. His fortune comes from his many business ventures as well as his television and hosting career.

Steve Harvey now gets paid an average of $10 million a year for hosting Family Feud. He also makes another $20 million annually for hosting his radio show.

Now, Steve Harvey is one of the richest comedians globally, alongside people like Kevin Hart, Will Ferrell, and more.

He recently started a partnership with the Black Entertainment app PopViewers, adding another stream of income to his empire.

Steve Harvey has been married three times and has seven children.

He was first married to Marcia Harvey from 1980 to 1994. The couple had twin daughters, Karli and Brandi, and a son, Broderick Harvey Jr.

In 1996, he married Marjorie Bridges-Woods. The couple has three children together: Wynton, Morgan, and Broderick Harvey III.

The couple divorced in 2005. In 2007, he married Marjorie Bridges-Woods again. The couple is still together and living in Texas.

Steve Harvey is also a devout Christian and has spoken openly about his faith. He has also been a supporter of Donald Trump.

In 2020, he was inducted into the National Radio Hall of Fame.

Steve Harvey is also known for his philanthropic work. He is the founder of the Steve and Marjorie Harvey Foundation, which provides scholarships to underprivileged students.

He has also donated money to various charities, including the Boys & Girls Clubs of America, the American Red Cross, and St. Jude Children’s Research Hospital.

The program has mentored over 1,000 young men to date.

What is Steve Harvey’s annual salary?

Steve Harvey gets paid an average of $10 million a year for hosting Family Feud. He also makes another $20 million annually for hosting his radio show.

How much is Marjorie, Steve Harvey’s wife worth?

Marjorie Bridges-Woods is worth an estimated $50 million.

Now that you know what Steve Harvey’s net worth is and how he built it, let’s take a look at some of the most important lessons we can take from his journey.

Steve Harvey is one of many celebrities and entrepreneurs who believes in “The Secret,” or the law of attraction.

Simply put, the Law of Attraction is the ability to attract into our lives whatever we are focusing on.

The Law of Attraction uses the mind’s power to translate whatever is in our thoughts and materialize them into reality.

Steve Harvey has cited this alone to be one of the sole reasons he is so successful.

Give Up Something to Get Something

Steve Harvey believes that to realize your full potential, you will need to give something up at some point.

There was a time when Steve Harvey was successful but not fulfilled. Specifically, during his Kings of Comedy Tour, he knew he wanted more out of his career.

So, he reluctantly decided to retire from his standup comedy career. This decision was difficult for him, but he wouldn’t have a net worth of $200 million today if he had never made it.