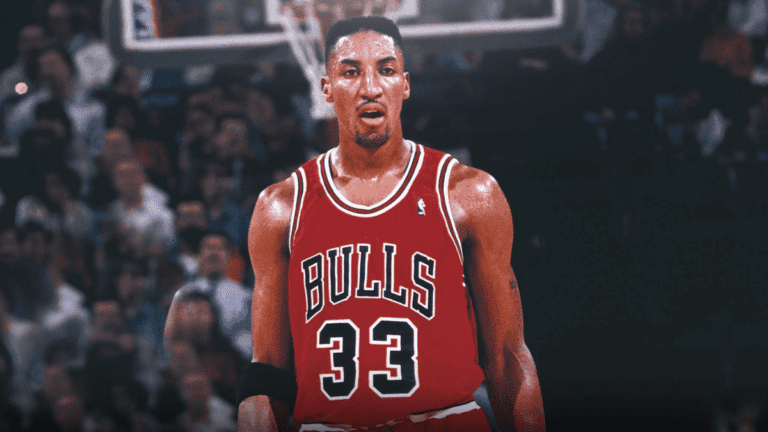 Have you ever wondered what the net worth of Scottie Pippen is? Well, the former professional basketball player is still worth a pretty penny.

As of January 2023, Scottie Pippen has a net worth of $20 million. He was also known for being Michael Jordan’s running mate on the Chicago Bulls during the 1990s,

He was the youngest of 12 kids born to Ethel and Preston Pippen. Preston worked in a paper mill but would ultimately suffer from a stroke.

This prevented him from walking and paralyzed his right side. Money was tight for the family, and having to account for 12 kids was challenging.

Preston and Ethel could not afford to send them all to college.

Luckily, by the time Scottie was a senior at Hamburg High School, he was a gifted basketball player.

He led his team to the state finals and earned All-Conference honors.

Hamburg was a relatively small school, so Pippen had no offers once he graduated despite his success.

He was fortunate enough to be discovered by Don Dyer, head coach of the University of Central Arkansas.

Dyer saw untapped potential in Pippen and offered him a full scholarship to the University of Central Arkansas.

This earned him all-American honors and attention from NBA scouts.

In 1987 the Chicago Bulls would orchestrate a trade with the Seattle Supersonics that sent Pippen to the Bulls in exchange for Olden Polynice and future draft pick options.

The duo would lead the Chicago Bulls to the conference finals for the first time in over a decade.

Even though the Bulls came short of the championship, the camaraderie built between Pippen and Jordan was undeniable.

By 1991, Pippen had been named an All-Star and emerged as a defensive stopper, with uncanny playmaking skills for his size.

He defended every position on the basketball court and created shots for himself and his teammates.

Pippen was selected All NBA Second Defensive Team for the 1990-91 season, and the Bulls would go on to win the championship that year and the two following years after.

In between the championship stint, Pippen would be a part of what is widely considered the greatest basketball team of all time, the 1992 USA Olympic team: The Dream Team.

He would dominate international play and return to the states with a gold medal.

Pippen would win three more championships and be selected to 7 All-Star games, 5 All Nba Selections, and 10 All-NBA Defensive team selections.

Pippen was one of the best perimeter players in the league.

Unfortunately, his time in Chicago would end after the 1998 championship.

He would spend a brief time on the Houston Rockets and Portland Trailblazers before ultimately ending his career in Chicago in 2004.

Pippen had a very unusual contract with the Bulls during his prime years. He signed what is arguably the worst NBA contract in history in 1991.

This deal was a seven-year $18 million dollar deal that Pippen and the Bulls agreed on.

Although this would be phenomenal for the average American, it was a lowball for a player of Pippen’s caliber, and his agents advised him not to take it.

However, Pippen came from a struggling background and was very eager to get his hands on money to support his family.

The Bulls took full advantage of this and offered him an inexpensive long-term deal.

The deal would ultimately have Pippen be the 6th highest-paid player on the roster by 1998 when he was arguably a top 5 player in the entire league.

Pippen would bounce back from this and leave the Bulls, make $11 million with the Houston Rockets, and then sign a five-year 67.2 million dollar deal with the Portland Trailblazers.

Pippen was luckily able to make over 107 million dollars for his whole career but could not capitalize on his peak performance which left millions on the table.

As of January 2023, Scottie Pippen has a net worth of $20 million. Pippen’s playing career has held him over till today.

He, unfortunately, was not able to generate more wealth, considering he made 5 times what he is worth now during his career almost two decades ago.

Although he may have missed out on earnings and not properly invested his money Pippen is still worth a fortune and expected to release a book, Unguarded, this fall.

Did Scottie Pippen win a ring without Jordan?

Scottie Pippen won 2 championships without Michael Jordan in his career.

Is Scottie Pippen a Hall of Famer?

Pippen is a two-time inductee into the Naismith Memorial Basketball Hall of Fame, once for his individual career and once as a member of the “Dream Team”, having been simultaneously inducted for both on August 13, 2010.

Now that you know what the net worth of Scottie Pippen is and how he built it, let’s take a look at some of the most important lessons from his journey.

Pippen, even though he was advised not to, signed a contract that was not fair to him, costing him millions. It is imperative to educate yourself about the nuances of the business world to ensure that you are always appropriately compensated for your worth.

If not, you risk making poor decisions that can be detrimental to your well-being in the long run.

Star In Your Role

Pippen is arguably the greatest role-player of all time. He understood his strengths and dominated in his role, which led to 6 NBA championships.

You can’t always be the Jordan of your company or start-up, but it’s important to know what your strengths are. Every Jordan needs a Pippen, and it’s okay to take a backseat if that’s what is best for winning in your situation.