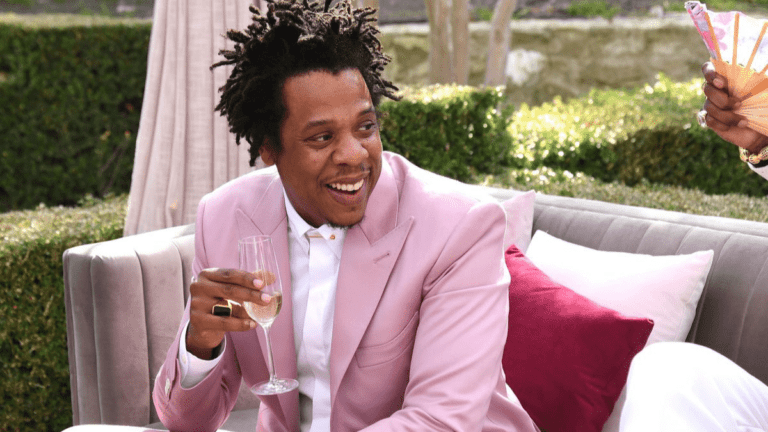 Have you ever wondered what the Net Worth of Jay-Z is? Although many of us know Jay-Z from his music career, that isn’t where most of his net worth came from.

Jay-Z has made most of his money either investing in or starting his own businesses.

Jay-Z has invested in everything from clothing to sports teams to alcoholic beverages. He also started many businesses in industries like music streaming and sports management.

In this post, we cover his vast business success, record sales, merchandise, and endorsement deals that have turned him into a billionaire.

Jay-Z (whose real name is Shawn Carter) was born in Brooklyn, New York, on December 4, 1969. He was one of four kids and was raised by a single mother.

He grew up in Marcy Houses, a notoriously roughhousing complex in Bedford-Stuyvesant, Brooklyn.

He bounced around from high school to high school before ending up at Trenton Central High School in Trenton, New Jersey.

He never finished his high school education, and like many others from his neighborhood, he started drug dealing and getting into nefarious activities.

The one outlet he always returned to throughout his life was music. According to his mother, Jay-Z used to wake up his family at night playing the drums using the kitchen table.

His mom eventually bought him a boombox for his birthday, and although it drove his siblings crazy, it was her attempt to keep him off the streets and out of trouble.

Luckily, it paid off. By the late 80s, Jay started making a name for himself in his neighborhood. He knew he wanted to make a career out of music.

When no major label gave him a record deal, he decided in 1995 to start his own record company Roc-A-Fella Records, with Damon Dash and Kareem Biggs.

His first album with Roc-A-Fella Records, “Reasonable Doubt,” sold 1.5 million copies in just its first year and reached number 23 on the Billboard 200.

In 1997, he struck a distribution deal with Def Jam, where he released his next album, In My Lifetime, Vol. 1, which outsold the prior one.

In 1998, Jay-Z released Vol. 2… Hard Knock Life, which turned Jay Z into a household name. Vol. 2 would go on to become Jay-Z’s most commercially successful album.

It went 5× Platinum, got a Grammy Award, and sold over five million copies.

We all know Jay-Z for his musical prowess. However, no great artist has become a millionaire just off of their craft. It takes sound investing and an entrepreneurial spirit to turn millions into billions.

So what has Jay-Z done as a businessman?

TIDAL was launched in 2014 as subscription-based music, podcast, and video streaming service.

In 2017, the company was purchased by Project Panther Bidco Ltd. (a holding company founded by Jay-Z).

After the acquisition, Jay Z turned the platform into an artist-owned music-streaming and entertainment platform. His focus for it was to forge a deeper connection to art.

As of January 2023, TIDAL operated out of 56 countries and housed over 70 million songs across all genres.

On March 4th, 2021, Square announced that it had acquired a majority stake in Tidal for $297 million.

Jay-Z will keep some of his shares in Tidal as it gets absorbed by Square and will also get a seat on Square’s board of directors.

In 1999, Jay-Z and Damon Dash created the clothing line Rocawear. The company was an immediate success and by 2000 was generating $50 million in revenue annually.

At its peak, the company was generating $700 million in annual revenue, and in March 2007, Jay sold the company to Iconix Brand Group for $204 million.

After Jay became a father in 2017 with his two twins, Rumi and Sir Carter, he and his wife Beyonce bought a pair of homes.

One was a $26 million East Hampton mansion, and another was a $88 million Bel Air estate. He still owns his Tribeca penthouse which he bought back in 2004 for $6.85 million dollars.

Armand de Brignac, also known as “Ace of Spades” after its logo, is a high-end champagne brand produced by Champagne Cattier and sold in opaque metallic bottles.

In November 2014, Jay-Z acquired the champagne company, and in February 2021, LVMH Moët Hennessy acquired a 50 percent ownership stake in the brand.

The transaction’s financial terms were not publicly shared, but according to Jay-Z’s verse on the song “What’s Free,” the company is worth “half a B.”

This would make LVMH’s stake in Armand de Brignac around $250 million. What is known is that the brand sold more than 500,000 bottles in 2019 alone.

Jay-Z is also the founder of the cognac, D’Ussé. D’Ussé was first launched in the US in 2012 when Jay entered a joint venture with Bacardi.

The cognac was designed to attract those who live a lavish lifestyle. D’Ussé has now launched many iterations of its product appealing to a wider market of customers.

The company is now valued at around 100 million dollars.

Back in January 2004, he purchased a small stake in the Brooklyn Nets for $1 million. With his help, the team moved the team from New Jersey to Brooklyn.

His work with the Brooklyn Nets allowed him to interact with athletes firsthand, and he went on to sell his stake in the Nets to start his own sports management business, Roc Nation Sports.

The company represents top athletes like Kevin Durant and Todd Gurley, as well as famous artists like Rihanna and J. Cole.

Jay-Z also has a significant amount of his net worth tied up in stocks of companies.

One of his best investments was buying $2 million worth of Uber back in 2013 when the company was still private. At its peak, that $2 million investment was worth an estimated $70 million.

As of January 2023, Jay-Z has a net worth of $1.4 billion. He has sold over 100 million albums worldwide, won 22 Grammys, and every album he has ever released has gone Platinum.

Jay-Z has amplified his wealth with sound business decisions and prudent investing. He is also married to Queen B, Beyonce, who has a net worth of $400 million.

It’s not where you come from; it’s where you’re going

Jay-Z came from a rough neighborhood with no father and zero expectations. He, by all means, should have just become another statistic.

However, he was able to find a passion that allowed him to escape his current situation and find himself a new future.

It just goes to show that you don’t need to come from privilege to become successful. If you want something, go out and get it.

If you can’t join them, beat them

The reason why Jay-Z started Roc-A-Fella Records is that no label would sign him. Instead of folding and giving up on his dreams, he decided to start his own label and make a go of it himself.

When you first get started doing anything, you will face a lot of setbacks. The trick is to have a Thanos mentality and just say to yourself, “Fine… I’ll do it myself.”

Invest in what you know

Most rappers with hundreds of millions of dollars didn’t achieve that strictly through music. What they did was make investments with the money they made from music.

What Jay-Z did a great job of was investing in things he knew. A lot of the companies he invested in or started were around entertainment, black culture, or sports.

These are all things that Jay either directly participated in or spent a great deal of time around.