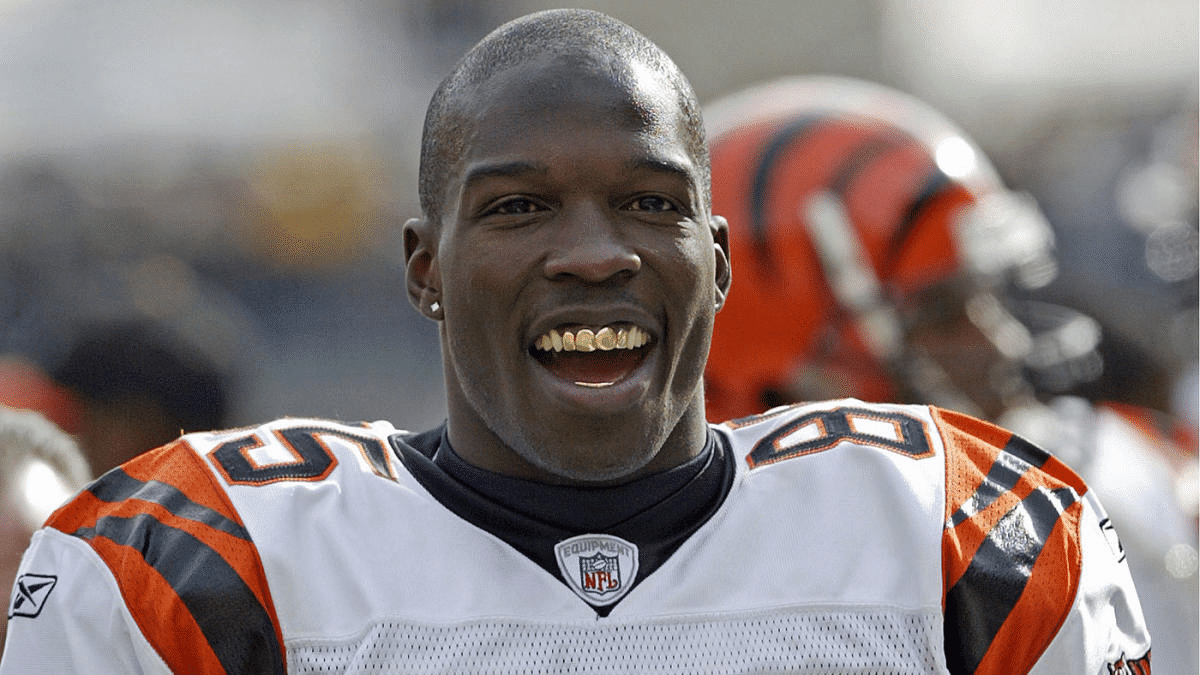 Have you ever wondered what the net worth of Chad Johnson is? The former NFL wide receiver built a massive following throughout his career and is worth a fortune. Famously known as Ochocinco, Johnson was one of the best receivers during his prime and a nightmare for opposing defenses. As of May 2022, Chad Johnson has a net worth of $15 million. This post will illustrate how he achieved such great success.

Johnson was born on January 9th, 1978, in Miami, Florida. He graduated from Miami Beach Senior High school and would attend Langston University.

However, he would not play football there and transferred to Santa Monica College, where he played with NFL future wide receiver Steve Smith. Johnson would dominate at Santa Monica, causing him to be aggressively recruited by more prominent Universities with better football programs.

Oregon State would recruit Johnson the hardest and he’d transfer there in 2000. He led his team to an impressive 11-1 record and a Fiesta Bowl victory over football powerhouse Notre Dame.

Johnson had all the intangibles to be a pro, excellent ball skills, an uncanny ability to beat defenders, and an unmatched swag and charisma. In 2001 he would enter the NFL draft and start his journey as one of the best wideouts the league has seen.

In the second round, the Cincinnati Bengals would draft Johnson with the 36th overall pick. He struggled to get playing time during his rookie year and couldn’t show his true ability.

The following year that would change, and Johnson would explode to the scene and set a franchise record with 1,355 receiving yards and 10 touchdowns.

Johnson quickly became a fan favorite; he was known for telling his teammates, “I’m open.” He even referred to himself as Seven-Eleven because he claimed he was always open.

Johnson was a huge trash talker but backed up with his play from 2003-2009, and he was quickly one of the best Wideouts in the league. During his career, he notched 6 Pro-bowl and 4 All-pro selections.

After an illustrious career with the Cincinnati Bengals, the two decided to part ways, and in 2011, the New England Patriots acquired Johnson for a fifth and sixth-round pick.

Johnson had his least productive season, only catching 15 passes for 276 yards and a touchdown. Despite his performance, the Patriots made the Superbowl, something that Johnson was never able to do in Cincinnati.

Although the Patriots would come up short, losing to the New York Giants 21-17, Johnson was able to experience playing on the NFL’s biggest stage, and it was a nice ending to his football story.

Similar to what Dennis Rodman did for the NBA, Chad Johnson did for the NFL. He was a superstar not afraid of the bright lights, with a personality and aura that touched millions of fans. He played a huge role in the growth of the NFL, and his influence will live forever.

As of May 2022, Chad Johnson has a net worth of $15 million. Throughout his career, he earned around $46 million over 11 seasons. This does not include profits from endorsements and his image and likeness. Although many reports have Johnson’s net worth at around $5 million, he confirmed on the Full Send Podcast that his checking account alone has $15,000,000.