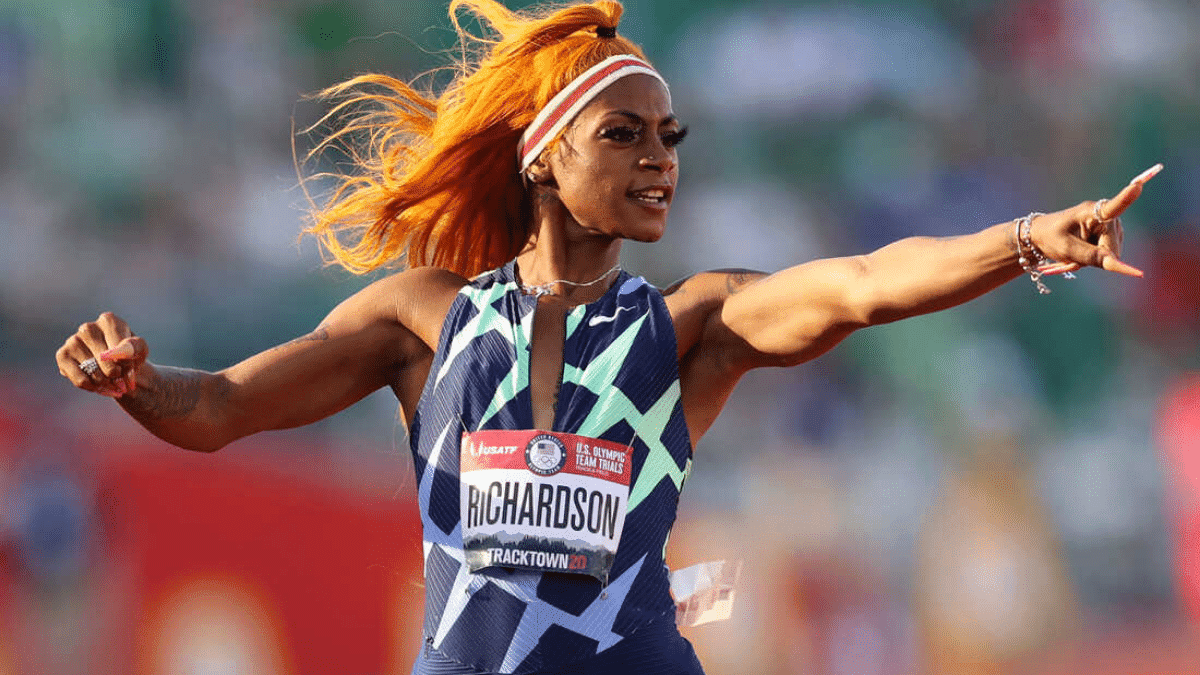 Richardson was born on March 25th, 2000, in Dallas, Texas. She was raised by her grandmother, Betty Harp. Ms. Harp would show Richardson her mother’s track and field trophies and accolades.

Seeing what her mother had accomplished inspired her to begin running herself. Her mother was a sprinter, so the 100 meters (m) and 200 meters races stood out to Richardson immediately, and she would start to run those sprints.

As a teenager, she was already one of the best in the country. In 2016, She won the 100 m title at the AAU Junior Olympic Games. The event is known as the most prominent national multi-sport event for the youth in the United States.

Richardson would win the title again the following year and was an exceptional talent. Her efforts earned her an offer to attend Louisiana State University (LSU).

Before attending LSU, she made her international debut at the 2017 Pan American U20 Athletics Championships. She would win gold in the 4 x 100-meter relay alongside fellow sprinters Gabriele Cunningham, Rebekah Smith, and Tara Davis.

Richardson competed at the 2019 NCAA Division 1 Outdoor Track and Field Championships. She won the 100 m and came in second in the 200 m; both times were extremely fast and world records.

She also posted an impressive second leg in the 4 x 100 m relay, and it was the second-best ever by a female sprinter.

Richardson was on track to be a star and did not feel the need to complete four years of college. Instead, she decided to sign a professional contract and forgo her college eligibility.

She qualified for the 2020 Summer Olympics, but unfortunately, a urine sample of hers tested positive for THC metabolites, indicating recent use of marijuana. She would be suspended for a month and attend a counseling program causing her to miss the Olympics.

Richardson claimed she used marijuana to cope with her mother’s passing but was very accepting of her actions and took full responsibility.

Richardson also gained support from various stars who thought that the punishment was too cruel for a non-performance enhancing recreational drug. As well, and felt the rules should be changed, considering marijuana is legal in many states.

Famous figures such as Joe Rogan Cardi B, Dwayne Wade, Patrick Mahomes, and others all supported her through social media and podcasts.

Richardson would return for the 2021 Prefontaine Classic but came in last place. She had endured a lot in a short amount of time, and her performance may have shown that.

However, she is still one of the bright young runners this country has to offer, and in due time should be at the top of the leader boards once again.

As of April 2022, Sha’Carri Richardson has a net worth of $200,000. Her wealth is from her earnings as a track star and sponsorship with Nike. Losing out on competing at the Olympics was devastating for her. However, she handled the situation so well and was very well-spoken. Her following increased after the incident, and she now has over a million more followers on Instagram. If Richardson can get back to the top, her wealth should increase as time goes on.