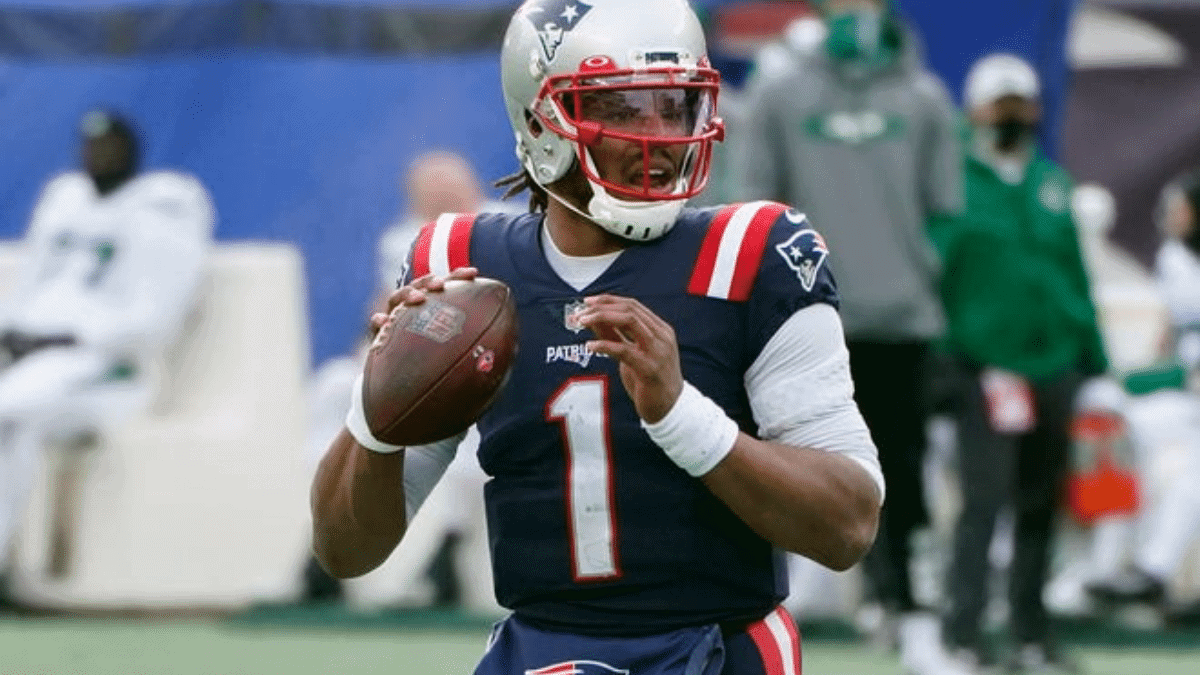 Have you ever wondered what the net worth of Cam Newton is?

Well, the former NFL MVP has had one of the most interesting quarterback careers in NFL history. As of this writing, Cam Newton is currently a free agent.

He was previously the quarterback for the New England Patriots after spending nine seasons with the Panthers, where he broke multiple records and even appeared in one Super Bowl.

As of November 2022, the net worth of Cam Newton is $75 million. In this post, we’ll show you how the football superstar made his fortune.

Cameron “Cam” Jerrell Newton was born in Atlanta on May 11, 1989 to Jackie and Cecil Newton, Sr. Hi father played safety for the 1983 Dallas Cowboys and the 1984 Buffalo Bills.

Cam Newton was a talented multi-sport athlete in high school, but it seemed he would always find his way to football.

With baseball, he developed a fear of being hit by a pitch. With basketball, he could never stay out of foul trouble. But football was his calling.

He attended Westlake High School in Atlanta, where he starred at quarterback as a 16-year-old junior.

In fact, in his most successful high school season, he threw for 2,500 passing yards, 25 touchdowns, and ran for 638 yards.

With these stellar stats, Newton quickly rose to the top of college scouting boards.

Ranked as the #2 dual-threat quarterback in the nation, Cam Newton received scholarships from the following college football programs:

At the beginning of his senior year, Newton committed to the University of Florida to play football. He spent one college season there before transferring to Blinn College and, eventually, Auburn.

Cam Newton played for the Florida Gators in 2007 and 2008, but was suspended from the team in November 2008 after being arrested for stealing a laptop from a fellow student.

He began playing for the Auburn Tigers in 2010 following a stellar season at Blinn College. After his first game with the Tigers, Cam was named SEC Offensive Player of the Week.

At Auburn, Cam Newton led his team to both the SEC Championship and the BCS National Championship, propelling him to the top of NFL Draft boards.

He took advantage of his rising fame and decided to declare for the NFL Draft.

On April 28, 2011, Newton was selected with the first overall pick in the 2011 NFL Draft by the Carolina Panthers.

He was the first reigning Heisman Trophy winner to go first overall since Carson Palmer in 2003.

Although he declared for the draft with another year left of college, he later returned to complete his studies. He received a degree in sociology.

The expectations for Cam Newton on the Carolina Panthers were sky-high.

Following a tremendous college career, the fanbase expected him to save the downtrodden franchise.

Well, he did just that. When Cam Newton took over as the starting quarterback in 2011, he injected life into the franchise. Below are some of his greatest achievements as a Carolina Panther:

Perhaps the most impressive segment of Cam Newton’s career was his 2015 Super Bowl Run.

The Carolina Panthers set the NFL on fire, going 15-1 and winning the NFC Championship Game. Following their big win, they were set to face off against Peyton Manning and the vaunted Denver Broncos in Super Bowl 50.

The Panthers put up a disappointing performance, losing to the Broncos 24-10. Still, the NFL named Cam Newton its #1 player heading into the 2016 season.

Following a series of unfortunate injuries, Cam Newton’s career as a Carolina Panther slowly but surely came to an end.

The team placed him on reserve in November and allowed him to seek a trade. After not being able to find a trade partner, the team eventually cut him.

Now that you know what the net worth of Cam Newton is and how he built it, let’s take a look at some of the most important lessons from his journey.

Don’t Make Excuses for Yourself

Cam Newton has often said that he’s “an example of why people deserve a second chance.”

After being arrested for stealing a fellow student’s laptop at the University of Florida, his college and NFL career was in jeopardy.

But after a second chance, he took full advantage. Most NFL fans now consider him the greatest Carolina Panther of all time.

Respect Your Peers But Do Not Fear Them

Cam Newton once said, “Tom Brady is good, real good, but he plays in the same league as I do.”

He respected Tom Brady’s game but knew that he was every bit as capable of success as someone who is widely regarded as the “GOAT” (Greatest of all time).

Winning Is All That Matters

Before anything else, Cam Newton is a winner. He prides himself on focusing on getting the win more than performing well.

This attitude, he believes, translates to success. Focus on winning, and the individual successes will follow.