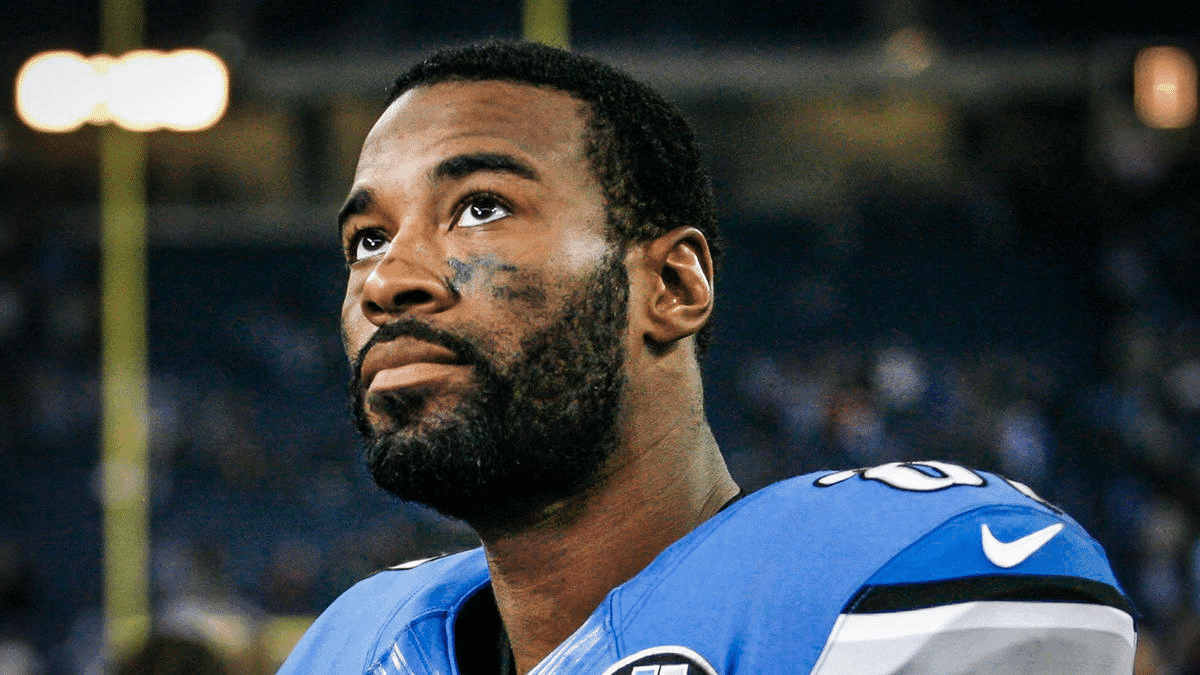 Have you ever wondered what the net worth of Calvin Johnson is? Through all of his professional endeavors, he has made quite a living.

Johnson was once a star in the National Football League and was so physically imposing that he got the nickname “Megatron” his rookie year.

As of November 2022, the net worth of Calvin Johnson is $45 million. In this post, we’ll show you exactly how he built his worth, and what you can learn from his story.

He grew up with both his parents in a small suburban neighborhood in Newnan. From an early age, Calvin Johnson developed a love for all sports.

His mother claims her son was throwing a football by the age of four! This love for sports strengthened as the family would watch football together on Sunday evenings.

The young boy’s love for sports was quickly seen in his school. Not only this, Calvin Johnson grew to be six feet tall by the time he was only a middle schooler.

He attended Sandy Creek High School in Tyrone, Georgia, and was a letterman in football and a baseball standout.

As a junior, Calvin Johnson caught 40 passes for 736 yards and eight touchdowns. As a senior, he went on to make 34 receptions for 960 yards and 11 touchdowns!

These insane high school stats landed him as a top ten wide receiver in the nation.

Additionally, he was considered a top one hundred player by almost every recruiting analyst. At the end of his senior year, Calvin Johnson committed to the Georgia Institute of Technology.

Unsurprisingly, Calvin Johnson had a stellar college career as well.

Going into his junior year, Calvin Johnson was named team captain. Following a mile-long list of accomplishments, this was definitely well deserved.

At the end of his college career, Johnson tallied 1,202 receiving yards on 76 catches. Outside of football, he was highly involved in school.

During his senior year, he took a trip to Bolivia where he planned a water fountain construction program with his academic program.

He ended up being selected as the second pick in the first round by the Detroit Lions. Calvin Johnson began truly making his mark in the league during the 2008 season.

On March 8, 2016, Johnson announced his retirement from the NFL after nine full seasons.

In 2019, Calvin Johnson and his wife Brittney aspired to open their own chain of cannabis dispensaries.

In February of that year, the couple was granted permission to open a medical dispensary in Michigan.

Calvin Johnson has stated multiple times that he’d like to take his chain statewide. The brand would operate under the name “Primitiv.”

In August 2019, Johnson was named to the board of directors of the Michigan Cannabis Industry Association.

As of November 2022, the net worth of Calvin Johnson is $45 million dollars. A majority of these earnings have come from his NFL career and athlete endorsement deals.

However, Calvin Johnson clearly wishes to keep expanding this net worth. Just last year, his chain of cannabis dispensaries crossed the million mark in yearly sales!

It is also worth noting that Calvin Johnson holds a ton of his wealth in real estate. After the pandemic, the value of these properties has nearly doubled from when he first purchased them.

Now that you know what the net worth of Calvin Johnson is and how he built it, let’s take a look at some of the most important lessons we can take from his journey.

From a young age, Calvin Johnson understood that success in life was earned through hard work and dedication.

This work ethic led him to accomplish incredible fleets in both academics, and athletics. Similarly, we should strive to always be working our hardest.

Focus On Your Talents

Everyone is born with a set of unique talents. If we learn to identify and refine these talents, there’s a seriously good chance they can assist us with growing our net worth.

Similar to Calvin Johnson, identify what it is that you naturally excel at and seek to leverage those talents!

Despite making millions of dollars in the league, Calvin Johnson never stopped looking for ways to make his net worth grow.

Consequently, his business ventures outside of the NFL have made him a living on their own. No matter how much success you’ve reached never stop striving to grow and be better!

If you enjoyed this article, you’ll never believe what the net worth of Tom Brady is!