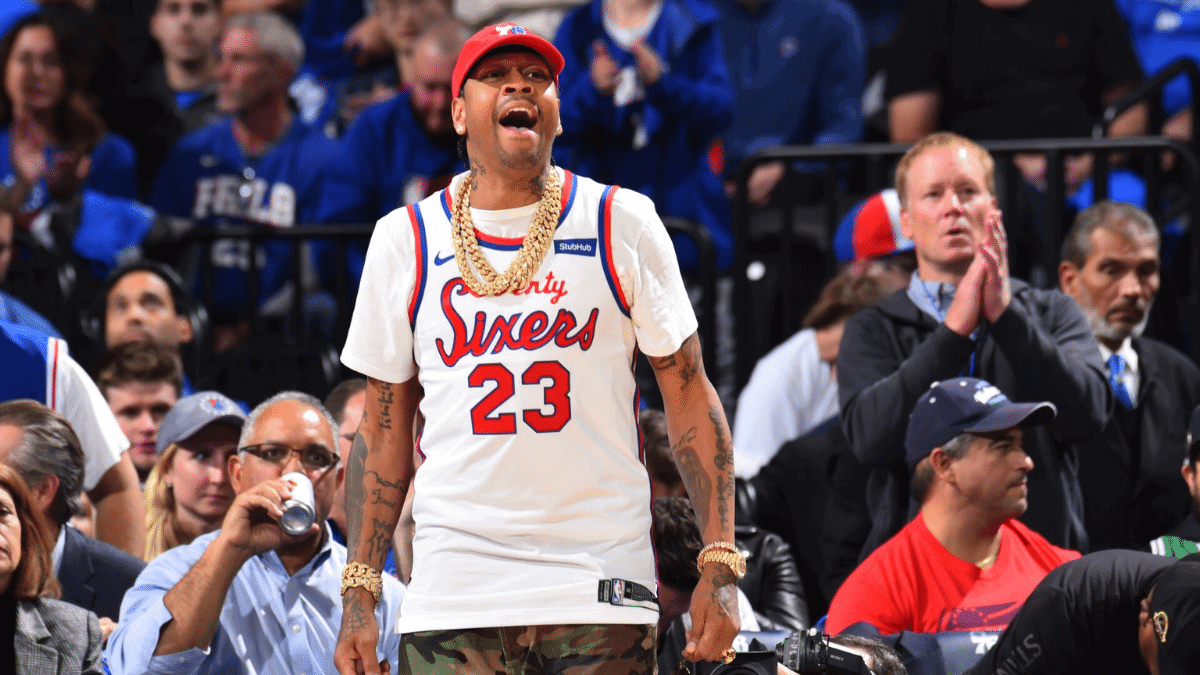 Have you ever wondered what the net worth of Allen Iverson is? If you’re a fan of professional basketball, odds are you have heard of him.

Regarded as one of the most legendary players to ever step foot on the court, the man definitely has quite the resume.

As of September 2022, the net worth of Allen Iverson is $1 million. In this post, we’ll show you how the basketball legend made his millions, and what you can learn from his story!

Allen Iverson was born on June 7, 1975, in Hampton, Virginia. He was born to a single 15-year-old mother, his father leaving him before he was born.

During his childhood years in Hampton, Iverson was given the nickname “Bubba Chuck.”

He got this nickname due to defending and sticking up for his friends at school in the rough town.

Consequently, Allen Iverson ran into a number of troubles while growing up.

Thankfully, the young boy showed an incredible talent for sports starting at a very young age.

Furthermore, Iverson took his team to both basketball and football championships in Virginia.

It had seemed that every college scout in the nation had their eyes set on the young talent.

To Allen Iverson and his mother, this was an escape from their reality. Things unfortunately, took a sour turn when Allen Iverson landed a 15-year prison sentence at the age of 18.

Iverson had been at a local bowling alley with some of his high school friends when a group nearby began to disturb them.

This quickly led to a physical bout and Iverson was arrested and detained that day. After two years, he was cleared of all charges.

Allen Iverson quickly finished high school afterward and focused on the next big step of his career.

After becoming NCAA eligible, scouts across the country sent Allen Iverson offers to join their college.

To both Iverson and his mother, this was once again their only chance to escape their neighborhood.

Unsurprisingly, Iverson signed for Georgetown University’s basketball team! Filled with delight, the small family finally saw a ray of light at the end of an otherwise dark tunnel.

In his first season at Georgetown University in 1994 at shooting guard, Iverson won the Big East Rookie of the Year Award.

Additionally, he was named to the All-Rookie Tournament First Team! These were incredible accomplishments for a player at his level.

NBA scouts across the country definitely began to take notice. That season, Iverson led his team to the Sweet 16 of the NCAA tournament. Here, they lost to the North Carolina Tar Heels.

In his second and last season in 1995, Iverson led his team all the way to the Elite Eight round of the NCAA tournament, where they lost to the Massachusetts Minutemen.

He ended his college career as the Hoyas’ all-time leader in career scoring average, at 22.9 points per game.

Iverson was named a first-team All-American. Iverson was also named the Big East Defensive Player of the Year in each of his two seasons at Georgetown.

The net worth of Allen Iverson would take off following his sophomore year when he declared for the 1996 NBA draft.

This was an incredible accomplishment at the time. The reason for this, no other student at Georgetown had ever left early for the NBA.

To no one’s surprise, he was selected as the first overall pick for the Philadelphia 76ers. Here, he would go off to create one of the most historic shooting guard careers of all time.

When he had first joined the Philadelphia 76ers, they had just finished a horrible season, ending with 18 wins to 64 losses.

Because of this, it was seen as Allen Iverson’s responsibility to help flip the franchise around. And this, he certainly did.

Iverson proceeded to do what he has always done best, play the game of basketball.

In his NBA debut alone, the young star dropped an incredible 30 points! It was no question he was a force to be reckoned with.

Iverson arguably had his most successful season in the year 2000. The star led his team to an incredible start, netting a 10-0 record.

Additionally, Allen Iverson was named a starter on the 2000-2001 NBA All-Star Team! Considering all the legendary names still playing at the time, this was a difficult task.

Shaquille O’Neal and Kobe Bryant also participated in this game, to name a few!

That year, Allen Iverson earned his first and only League MVP for his Herculean efforts. Perhaps the biggest accomplishment of his NBA career.

Allen Iverson’s stint with the Denver Nuggets was a little rocky.

Although he put up great numbers, the team didn’t really gel well together and eventually parted ways.

It was an unfortunate end to what could have been a great partnership.

A forgettable point of Iverson’s basketball career was his time with the Pistons. His stint in Detroit was tumultuous to say the least. He had signed with the Pistons in 2008, and expectations were high as usual.

However, things quickly went downhill as Iverson began to clash with head coach John Kuester. This led to a decreased role for the former MVP and frequent benchings.

In 2010, Iverson finally parted ways with the Detroit Pistons and announced his retirement from professional basketball. This effectively ended his career after 14 seasons.

In 1995 Iverson played in Japan in order to join US World – University-Game Team. Among those involved were Tim Duncan and Ray Allen.

He led the United States with scoring, steal and assist performances. During the competition the team won an undefeated record against Japan’s hosts.

In 2003 he was chosen to represent the USA at the 2003 FIBA American Olympic qualifier tournament. They took gold with a perfect 10-0 record.

The team was selected for the 2004 Olympic Games. Allen played in 8 games in all. Amerika clinched the Olympic qualification with 114 to 71 victories against Canada at home.

During his career, Iverson earned about $154.8m. Most of it came from his stint at the Philadelphia 76ers, which earned him about $18 million per year.

The two parties however agreed to cancel their contractual relationship because their tenure was disastrous. In his tenure, he made a total of $4.5 million.

Net Worth of Allen Iverson 2022

As of September 2022, the net worth of Allen Iverson is $1 million.

While this may seem like a small sum compared to his career-long earnings, it’s worth noting he has roughly $32 million dollars locked up in a Reebok Trust Fund.

He signed an endorsement agreement in 2001 with Reebok. Reebok gave Iverson a lifetime deal to provide him with $800,000.

Reebok is expected to pay Allen $5 million – 10 million annually. Initially, Reebok had invested $32M in the trust to inherit Allen’s 55th birthday. The magic day to mark Point 3 will be July 7, 2030.

The star’s lavish lifestyle and maintenance of family member expenses have led Iverson to drop back down to this modest net worth of one million.

Despite where his net worth may stand today, it’s estimated that Allen Iverson has made roughly $150 million dollars during his fourteen-year stay in the NBA.

Despite his height, Allen Iverson’s tenacious scoring style often drew comparisons to none other than Michael Jordan, one of the best players in NBA history.

Back in 2020, the backpack of Allen Iverson containing a collection of approximately $500,000 jewelry was robbed in Philadelphia Sofitel.

A police investigation went underway to identify a suspected thief. It took place at 9:30am in the Philadelphia Sofitels.

Iverson’s luggage was taken, but he didn’t appear at the hotel. Christopher Daniel was eventually named in an arrest warrant for theft.

Allen Iverson married Tawanna Turner in 1991, his longtime girlfriend. They were dating when they were in high school but fell in love after a decade.

During the marriage they had already had 2 daughters, one sister and one brother. Upon marriage the couple had four more children.

Sadly, the couple ended their marriage when Tawanna Turner filed for divorce.

How Much Money Will Allen Iverson Get From Reebok?

What Was Allen Iverson’s Highest Net Worth?

By the date of the end of Iverson’s NBA season, reports surfaced that his fortune reached $200M. The investment would be enough for his whole life. Unfortunately, the situation wouldn’t remain the same for the former NBA star.

“I don’t know anybody who works harder than me.”

“I can only be me. I’m not gonna try to sell myself to you guys or anybody else.”

“My life is great. My kids are healthy. I’m happy.”

“I just wanna thank all the real fans out there for their support. everything’s good.”

“They can say what they want about me, but I know I give it my all.”

“I don’t have to show anybody anything else. I think I’ve proven myself over the years.”

“My heart is bigger than anything else.”

“God has a plan for me. That’s all I can do is just believe in Him.”

“I’m human, just like everybody else. I made a mistake.”

“I don’t know what the future holds but I do know that I’m going to give it my all and try to be the best that I can be, no matter what happens.”

Now that you’ve learned what the net worth of Allen Iverson is as well as how he built it, let’s take a look at some of the most important lessons from his journey.

Thankfully for Allen Iverson, his talents within sports were obvious at a very young age.

Because of this, he was able to continue nurturing his strongest talents until he finally made it.

Similarly, it’s important that we recognize our own talents as soon as possible and focus on leveraging them in any way we can!

At many times in his life, Allen Iverson surely felt like he needed to quit or take a break from pursuing his lifelong dreams.

Had he done either of these for an extended period of time, the NBA legend may never had such a lucrative and successful career.

Because of this, we as well should never give up on our dreams and sights for the future.

Not All Good Things Last Forever

Respectfully, we can take away from Iverson’s story that a massive net worth is not automatically there to stay.

Like all good things in life, we need to preserve it and continue to grow as individuals. Even if we get a taste of success, it’s important to remember to always keep pushing.

The net worth of Allen Iverson would never be even what it is today had he not.