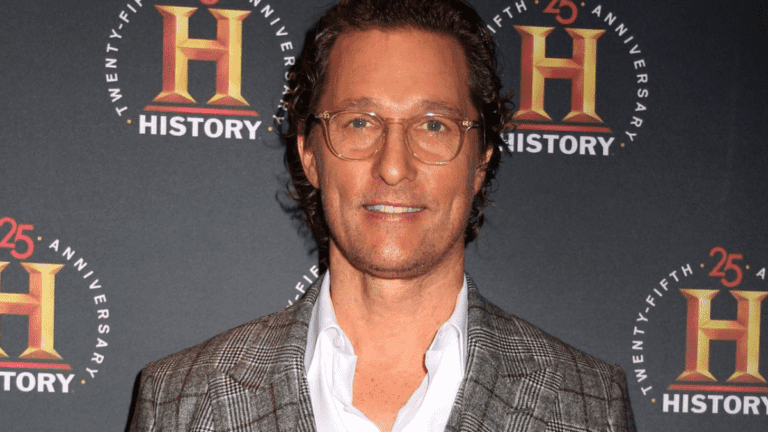 Have you ever wondered what the net worth of Matthew McConaughey is? The famous actor and Texas Icon has accrued a large fortune.

Known as an Oscar-winning actor, McConaughey has also branched out into sports, politics, and philanthropy. He has multiple box-office hits, lucrative endorsements, and a powerful brand.

As of January 2023, Matthew McConaughey has a net worth of $150 million. This post will show you exactly how McConaughey earned his wealth.

McConaughey was born on November 4, 1969, in Uvalde, Texas, a small city ~80 miles west of San Antonio. He is the youngest of three boys (one adopted). His father was an oil salesman and his mother a kindergarten teacher.

His parents, Mary and James (known as “Jim”), married each other three times and divorced twice. McConaughey has said that while their arguments were serious and intense, only they understood each other and so they always reconciled.

At age 11, McConaughey moved to Longview, about 130 miles east of Dallas, in Northeast Texas. There, he would also attend High School and enroll in a Rotary exchange program, where he would live in Australia for a year with a host family.

Upon returning to the U.S., McConaughey would later attend the University of Texas – Austin, between 1989 and 1993. Originally, McConaughey wanted to go to Law school (much to the approval of his father).

Midway through college, he realized that he wanted to do acting instead and was surprised when his father supported his decision. His father’s only condition was that he gave his full effort while pursuing acting.

In the early ’90s, while McConaughey was still in college, he began his acting career by appearing in TV commercials. His first major role was in Dazed and Confused, which he secured by meeting the casting director in an Austin bar one night as a student.

It was an impressive debut for him because the role contained a fair amount of improvisation. Nevertheless, McConaughey and the movie itself received positive reviews and performed well in the box office.

Throughout the rest of the ‘90s, McConaughey would earn several more roles such as Angels in the Outfield (1994), A Time to Kill (1996), which grossed over $100 Million in the U.S. alone, and Contact (1997). Several of these films greatly exceeded expectations for box-office sales, and so McConaughey’s value as an Actor skyrocketed.

Beginning in the early 2000s, due to his popularity with women and attractive physique, McConaughey began starring in romantic comedies. While many were successful such as The Wedding Planner (2001) and How to Lose a Guy in 10 Days (2003), McConaughey noticed he had developed a typecast.

In the film industry, this means that producers and casting directors begin to associate you with a specific type of role or film genre. As a result, opportunities for other roles begin to dwindle.

In 2011, McConaughey began to turn down offers to star in such films in order to be more selective. No longer fulfilled, McConaughey wanted to find roles that would challenge him and were aligned with his core values. This period of transformation in McConaughey’s career is sometimes dubbed the “McConaissance”.

After spending two years with limited opportunities and offers, McConaughey was finally able to secure new roles. Beginning in 2013, he starred in a series of extremely successful films.

These include Dallas Buyers Club (2013), for which he won an Academy Award for, The Wolf of Wall Street (2013), and Interstellar (2014). Each of these films was incredibly successful with the latter two each grossing over $350 million globally.

Aside from his box-office earnings, McConaughey has also secured lucrative partnerships with popular brands.

One example would be the Lincoln Motor Co. where in 2014, McConaughey became the face of their TV ad campaigns.

According to reports, Lincoln spends the most on TV ads per car sold, out of all major car brands in the U.S. Therefore, his role on the Lincoln team is extremely valuable to them and their sales.

Like fellow A-listers, Dwayne Johnson and George Clooney, McConaughey is also building a name for himself in the Spirits industry. In 2016, he became the Creative Director for Wild Turkey Bourbon and partnered with them to create his own version of their classic spirit.

They released their “Longbranch” line of Wild Turkey Bourbon, inspired by McConaughey, in the Spring of 2018.

While the value of his stake has not been reported, the MLS is the third most-watched Soccer league in the U.S., and Austin is the league’s newest team. Therefore, there is an incredible amount of attention and excitement surrounding the new team in Austin.

As of January 2023, Matthew McConaughey has a net worth of $150 million. His combination of box-office success and annual earnings make him one of the world’s highest-paid actors. McConaughey is able to command over $15 Million per role due to the consistent success of his previous films.

Additionally, in 2020, McConaughey released his memoir, Greenlights. With hundreds of thousands of copies already sold, his earnings will benefit from this new income stream.

Don’t Be Afraid To Take Risks

McConaughey took two major risks in his career. First, he decided to forgo law school and pursue acting because it interested him more and matched his skill set.

Second, in order to attract roles in different types of films, he passed on opportunities for over two years!

Do not settle for an opportunity that won’t fulfill you or where you aren’t likely to succeed.

Giving Back Can Be Mutually Beneficial

McConaughey has become an icon in Texas and especially in Austin. He has continually served that community via his philanthropic efforts, by giving commencement speeches, etc.

This is important because when Austin F.C. was looking for minority owners, that opportunity was available to him. The good you do in the world will find a way of benefitting you as well.

Luckily, McConaughey was in a position where he was able to refuse to work unless the right role became available for him. While he was more than okay financially, it still represented great uncertainty and risk for his career trajectory.

Remember to always bet on yourself and when the opportunity does arise, exceed all expectations.