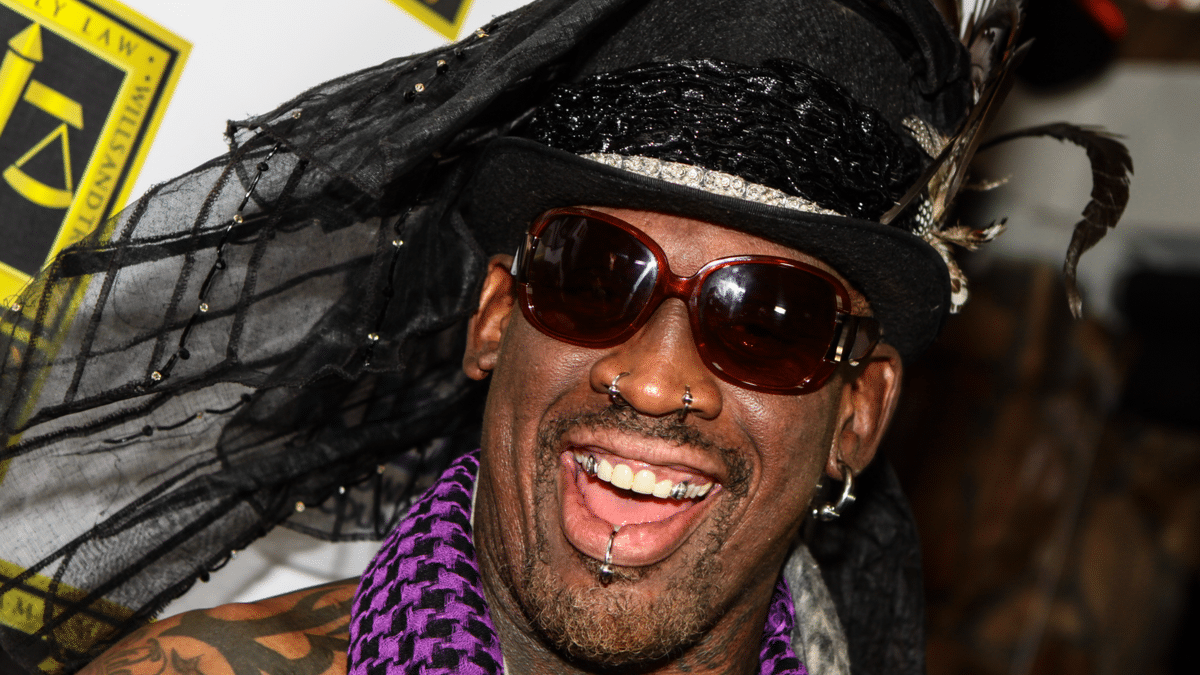 Have you ever wondered what the net worth of Dennis Rodman is? If you’re a fan of basketball, odds are you have heard of him. Dennis Rodman played on the winning Chicago Bulls team of 1995 and won 3 straight rings with them. Additionally, he’s considered one of the best power forwards the game has ever seen. Outside of the game, he was also known for his lavish lifestyle. Many would describe Rodman as the rockstar of the NBA.

Dennis Rodman has a very unique story in the NBA. The star amassed a large net worth during his time in the league. Unfortunately, this did not last very long. In this post, we’ll discuss how Dennis Rodman built his net worth, then eventually lost the majority of it.

Dennis Rodman was born on May 13, 1961, in Trenton, New Jersey. He lived with his parents, Philander and Shirley Rodman. Additionally, he also lived with his two siblings, Debra and Kim Rodman. Philander Rodman abandoned the family and eventually settled in the Philippines when Dennis was a very young kid. Shirley Rodman was left with the sole responsibility of fending for her family. She worked multiple jobs at once, and even turned to selling drugs to make ends meet.

Dennis Rodman became interested in basketball while attending South Oak Cliff High School. However, he wasn’t necessarily a stand-out athlete. At the time, he was only 5’6! After graduating from high school, Rodman accepted an overnight job as a janitor. During this time, he had an incredible growth spurt. Dennis Rodman grew from 5’11 to 6’7! Consequently, Rodman decided to try up basketball again.

He joined and played basketball for North Central Texas College. After only one semester, Rodman, unfortunately, dropped out due to poor grades. His skills truly began to shine when he transferred to Southeastern Oklahoma State University. While playing for the university, Rodman won three NAIA All-American awards!

Dennis Rodman and the NBA

During his time in college, Rodman earned the attention of the Detroit Pistons. Rodman entered the NBA draft in 1986. Here, he was selected as the 3rd pick of the second round by the Detroit Pistons. The Detroit Pistons won 52 games to make a place for themselves in the 1987 NBA Playoffs. During the next season, Rodman played consistently well. During this time, he put up an average of 11.6 points and 8.7 rebounds.

In 1992, he won the first of the seven consecutive rebounding crowns. Later in 1993, the coach of the Detroit Pistons, Chuck Daly, resigned. Consequently, Rodman’s relationship with the club’s management got strained. Rodman soon left the team, later playing for four more additional NBA organizations.

He won five NBA championships, was a two-time NBA all-star, and a seven-time (consecutively) NBA rebounding champion. He earned the NBA All-Defensive First Team honors seven times and won the NBA Defensive Player Award twice. His Pistons jersey, number 10, was retired in April 2011. He was inducted into the Naismith Memorial Basketball Hall of fame the same year.

Dennis Rodman was known for his incredible rebounding ability and aggressive style of play. Because of this, he was given the nickname “The Worm.” Throughout his 14 seasons with the NBA, Rodman played in 911 games, scored 6,683 points, and grabbed 11,954 rebounds, translating to 7.3 points and 13.1 rebounds per game in only 31.7 minutes played per game.

Dennis Rodman and the Chicago Bulls

Dennis Rodman brought additional highlight to his name when he made the historic transfer to the Chicago Bulls. The year was 1995, and Rodman had just come out of a dominant streak with the Pistons. At the time, the Chicago Bulls had other talented players such as Michael Jordan and Scottie Pippen. This made the transfer and trio all the more exciting.

During his time with the Chicago Bulls, Rodman was able to amass a total of three rings. This led his total count to now being 5! Dennis Rodman dominated the league during the 1995 – 1998 championship run Chicago enjoyed. With the help of Michael Jordan and Scottie Pippen, the trio was arguably the best of all time.

As of May 2022, Dennis Rodman has a net worth of $500,000 dollars. Throughout his career, however, the star earned $43 million dollars. This is significantly higher than his net worth today. He has involved himself in numerous other income-generating occupations. Rodman has gone into acting, writing, and even wrestling. More recently, Rodman has signed endorsement deals with a company known as Pot Coin.

Despite earning millions of dollars in basketball salary, Dennis Rodman has also clearly lost millions. This is largely in fines due to professional misconduct. In 1997, Rodman was given a $200,000 dollar fine for kicking a referee in the groin. In addition to the fine, he was also suspended for 11 games.

Although he struggled to manage his wealth Rodman’s path to the NBA wasn’t easy and is very admirable. He recently spoke on his past in a piece by The Sports Rush stating “My parents were selling cocaine everyday.” Which was hard for him growing up, but he used basketball as an escape and as a result is one of the greatest basketball players of all time.