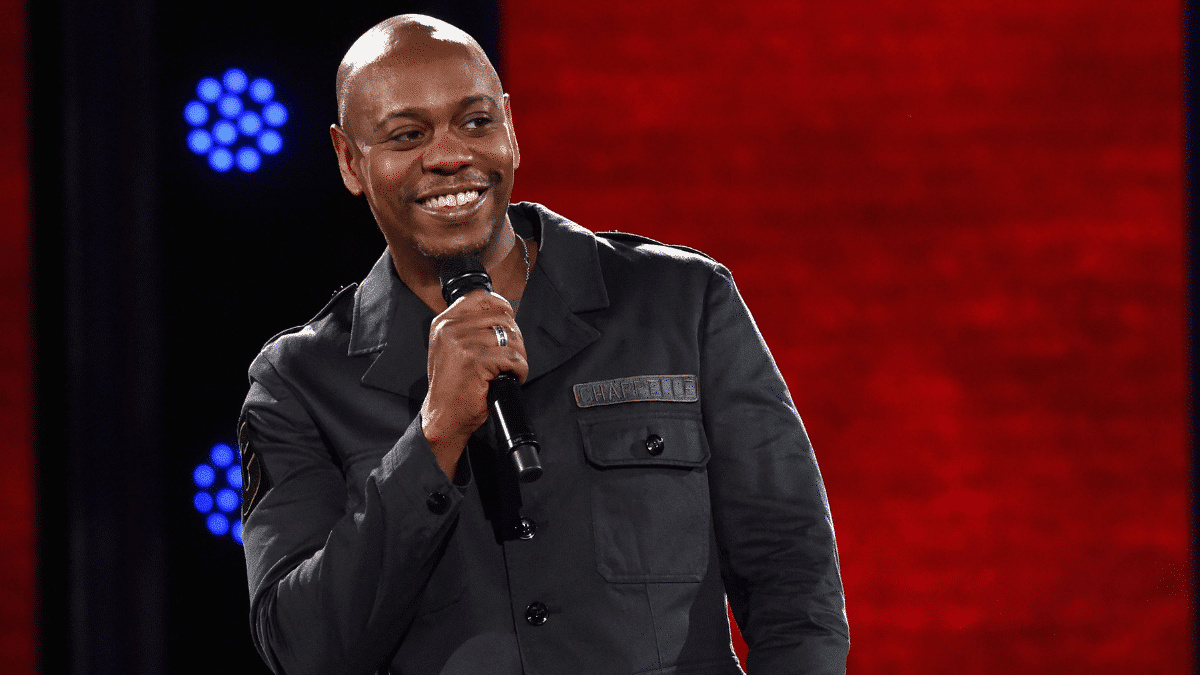 Have you ever wondered what the net worth of Dave Chapelle is? Well, the comedian, actor, and screenplay writer has had quite the career so far. His satirical comedy style has made him one of the biggest comedians of his time and has given him worldwide notoriety. He has received a Grammy for two of his Netflix-produced comedy albums, The Age of Spin and Deep in the Heart of Texas. His Netflix original stand-up, Equanimity, was nominated for three Emmys and received the Outstanding Variety Special Award.

In 2019, Chappelle received the Mark Twain Prize for American Humor. Presented by the Kennedy Center, this award represents America’s highest comedy honor. With all of his accolades, Dave Chapelle as of May 2022 has a net worth of 50 million dollars. In this post, we show you exactly how Chapelle achieved his mastery and gained his massive net worth.

Dave Chappelle was born on August 24, 1973. He grew up in Silver Spring, Maryland, and both his parents were very politically active. His parents would consistently have social activists visit their house to discuss issues faced in society. Chapelle would sit in on these conversations and would chime in with his humor and insight. He said his comedic role models growing up were Richard Pryor and Eddie Murphy.

His parents separated while he was still in school. Afterward, he would end up staying in Maryland during the school year and go back home to his father in Ohio over the summers. He attended The Duke Ellington School of the Arts for high school, where he studied theatre arts. Upon graduation, he chose to skip college and move to New York to pursue comedy.

Upon arriving in New York City, Dave worked as many stand-up gigs as he could get. One of his first big breaks was when he performed at the famous Apollo Theater. However, he was quickly booed off the stage.

Chappelle has later said that the experience gave him the courage to keep pursuing comedy, as him getting booed off stage wasn’t as hurtful as he thought it would be. He would keep performing stand-up shows all over New York wherever he could, from venues to public parks. Chappelle quickly started to pick up notoriety on the New York comedy circuit.

His first big break was in 1992 where he won critical acclaim for his TV appearance in Russell Simmons’ Def Comedy Jam. His appearance on this show allowed his stardom to take off and get appearances on shows like Politically Incorrect, The Late Show With David Letterman, The Howard Stern Show, and Late Night With Conan O’Brien.

Throughout the ’90s, Chapelle would have guest roles on many TV shows and numerous pilots. None of the pilots ended up taking off, and he never got a full-time role in any of the shows that he had guest appearances on. However, in 2003, he would get his big break when he finally debuted his own weekly sketch comedy show on Comedy Central called Chappelle’s Show.

Chappelle’s show, the Chappelle’s Show, parodied many aspects of American culture. The show poked fun at everything from racial stereotypes, to politics, to trending pop culture. The show was very in tune with black culture and frequently featured hip-hop and R&B artists. Chapelle’s Show also featured other black comedians’ work, from Paul Mooney to Charlie Murphy.

It didn’t take long for the show to gain popularity, so much so, that Viacom (the parent owner of Comedy Central) reportedly offered Chapelle $55 million to continue producing episodes of Chappelle’s Show for two more years.

Chapelle was living lavish, getting more popular by the episode and doing stand-up gigs at famous venues like The Fillmore Auditorium, where prior comedians like Richard Pryor and Robin Williams had performed. Everything looked great up until season 3 of the show.

It was season 3 where Chapelle’s fame got the better of him. He started to hate working his 20 hour days and claimed that the show’s popularity made it difficult for him to pursue his stand-up career, which was most important to him.

Season 3 was scheduled to air May 31, 2005. However, in early May, Chappelle stunned everyone and abruptly left during production to go to South Africa. This decision meant Chapelle had to walk away from the $55 million deal he made with Viacom just two years earlier. Although it was a difficult decision, Chapelle knew that it was best to take a step back and reflect on the type of man he wanted to become.

In August 2013, Chapelle returned to the states to pursue stand-up full-time. He was on tour for three years before making his hosting debut on Saturday Night Live, the weekend of Donald Trump winning the 2016 presidential election. He held nothing back in his opening monologue and tackled many issues that black American’s were facing at the time.

His performance received widespread praise from critics and audiences. It even won him an Emmy at the 69th Primetime Emmy Awards for Outstanding Guest Actor in a Comedy Series.

Within two weeks of his SNL performance, Netflix announced they would be releasing three new stand-up comedy specials from Chappelle in 2017. The deal said that Chappelle would be paid $20 million per special.

The first two specials were released on Netflix on March 21, 2017, and were an immediate success. Netflix announced in April that his specials were the most viewed comedy specials in Netflix’s history. A few months later, in December, Netflix announced they were expanding Chapelle’s deal to include two more specials for an undisclosed amount of money.

As of May 2022, Dave Chapelle has a net worth of 50 million dollars. Chapelle has had a very long and controversial career in comedy. From walking away from a 55 million dollar deal in 2005 to making tens of millions with Netflix, Chapelle has had a sea-saw of a career. Although the Chapelle Show is now almost 20 years old, Chapelle shows no decline in his comedic genius. In 2020, Sticks & Stones, one of Chapelle’s Netlfix Original Stand-Ups, earned Chappelle his third consecutive Grammy for Best Comedy Album.

Despite all this success and love from millions worldwide, Chappalle was recently tackled on stage during his show in Hollywood by an armed audience member. Luckily Chappalle was unharmed, and he and fellow comedian Chris Rock later joked about it onstage.

They say if you don’t have haters, you’re doing something wrong. Chappalle being attacked is a true testament to his greatness as a comedian.