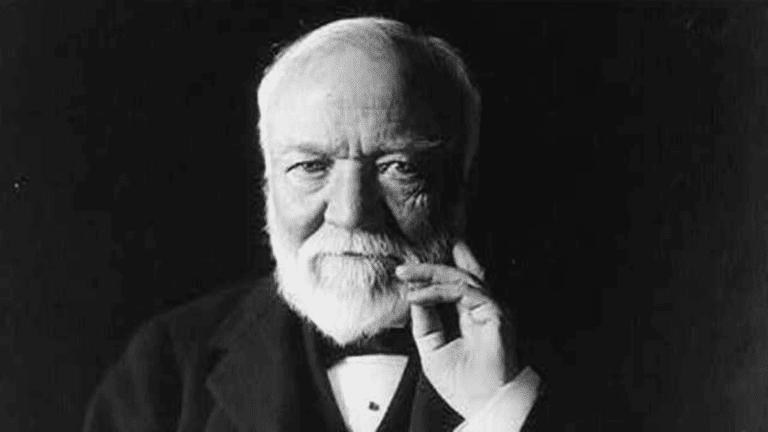 Have you ever wondered what the net worth of Andrew Carnegie was?

Andrew Carnegie has an incredible “rags to riches” story that led him to a net worth today of $310 billion.

This is more than Bill Gates, Warren Buffet and Jeff Bezos combined. In this post, we show you exactly how Carnegie built his net worth.

Andrew Carnegie was born on November 25, 1835, in Dunfermline, Scotland. He grew up in poverty where his parents worked hard labor jobs.

Due to the industrial revolution, Carnegie’s parents lost their jobs and they fled Scotland in search of a better life.

These times were hard for Andrew Carnegie as he saw his parents suffer financially. Nonetheless, he describes these times as motivating for his desire to be successful.

In 1848 the Carnegie family landed in Pittsburgh, Pennsylvania. Even in their new country, Carnegie’s parents struggled to find work.

Consequently, he had to drop out of school to help support his family. Soon, he found a job working as a telegraphist for a nearby firm.

A telegraphist is an operator who uses a telegraph key to send and receive Morse code from landlines or radios.

It was here where Carnegie developed incredible telegraphing skills and soon was recruited to work for the Pennsylvania railroad company as a lead telegraphist.

At the time, this was the largest corporation in the world.

As a prodigy telegraphist, Carnegie was paid handsomely, especially for his young age. He was allegedly even able to recite morse codes without writing them down.

Carnegie understood that in order to be great, he must learn from the greatest.

How could he build wealth without an example to lead? Soon after joining the railroad corporation, Carnegie met his soon-to-be mentor, Tom Scott, a renowned railroad executive.

Upon realizing Carnegie’s remarkable abilities, Tom Scott took him under his wing as an apprentice.

He taught Carnegie everything that needed to be known about building a business in the 1850s.

Because this all took place during the industrial revolution, Carnegie primarily bought ownership of iron and oil. This alone would result in him making his first fortune by the age of 30.

The American Civil War began in 1861, throwing Carnegie into the draft by default. He was able to escape the war by paying a substitute to take his place.

Then, he began to brainstorm. Carnegie realized a need for iron bridges. Wooden bridges were burned down too easily in the war. This led him to start the Keystone Bridge Company.

Carnegie was very strategic with his company. Aside from building bridges, they also were an iron mill.

This meant they didn’t have to mine or source their iron like their competitors. They could make their own. This allowed Carnegie to wipe out the competition.

His earlier connections with railroads were also leveraged.

As a result, Carnegie had a triad of rising empires in oil, iron, and railroads. He understood where solutions were needed and delivered.

In his early 30’s, Carnegie moved to New York City.

He searched for opportunity and hustle. What he found were greed and disappointment. He details this time as inspiring his philanthropic motives.

In an attempt to make the world a better place, he continued growing his empires.

Carnegie spent the next decade improving his operations and profitability. It was also at this time that Carnegie ruthlessly destroyed any potential competitors in any way he could.

He never stopped focusing on improvement and optimization.

He would even go as far as to create widespread negative rumors about competitors and then buy them out when they would drop in profitability. As long as his empire grew, Carnegie was happy.

After many years, wage disparity grew by a large margin in the oil industry. Carnegie slashed wages and increased hours to meet competitive demand.

This contradicted his kind, giving appearance in public.

Growing tired of management roles and accusations, Carnegie sold his empire to J.P. Morgan for $480 million in 1901.

Carnegie would then proceed to give the majority of his wealth away to philanthropic causes. He helped build over 1,700 public libraries across America.

Before this, there were only a few public libraries in the world. Carnegie strongly believed in the power of self-education and made it a public mission to make this accessible to everyone.

As of January 2023, Andrew Carnegie would have had a net worth of 310 billion dollars, adjusted for inflation.

This places Carnegie as one of the wealthiest individuals who’s ever lived throughout human history, right below John D. Rockefeller!

This net worth is also far larger than any modern net worth you see in today’s Forbes lists.

Carnegie was one of the largest advocates for self-education. While he lived many years ago, this practice stands stronger than ever today.

We’re fortunate enough to be in a technologically adept world. We can learn most skills completely free online whenever we have the free time to learn them.

Opportunities are everywhere. They’re never obvious in the moment but they are always obvious once they’ve passed.

While we aren’t living through the industrial revolution, there are always new opportunities we can capitalize on.

Carnegie was a master of strategy. Implementing strategy in our lives gives us structure and a path.

The more detailed and strategic we can be, the better and more impactful our execution will be.

Finding the right mentor is one of the most underrated prerequisites in building a successful business.

Mentors can guide us into successful paths. Carnegie knew this and sought one out early in his career.

No matter where you are in your career, it is important to seek mentorship from someone who you aspire to be like.